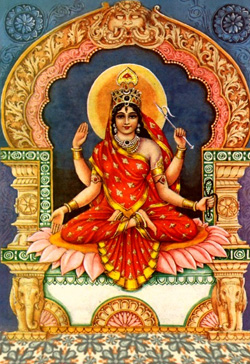 In Hinduism, Bhuvaneswari is the fourth of the ten Dasa Mahavidya goddesses and an aspect of Devi or Durga as elements of the physical cosmos, in giving shape to the creation of the World”. The word Bhuvaneswari is a compound of the words Bhuvana Iswari, meaning “Goddess of the worlds” where the worlds are the tri-bhuvana or three regions of bhuh (earth), bhuvah (atmosphere) and svah (heavens).

Bhuvaneshwari is known as the sovereign Queen of the Universe. Bhuvaneshwari means the Queen or ruler of the Universe. She is the Divine Mother as the Queen of all the worlds. The entire Universe is her body and all beings are ornaments on her infinite being. She carries all the worlds as a flowering of her own Self-nature. She is thus related to Sundari and to Rajarajeshwari, the supreme Lady of the Universe. She is also known as Adi Shakti or Durga i.e. one of the earliest forms of shakti. She is capable of turning situations according to her wish. It is considered that even the navagrahas and Trimurti cannot stop her from doing anything.