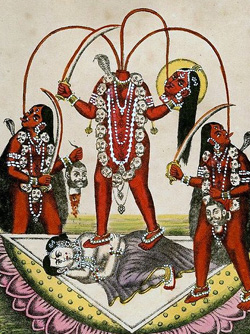 Chhinnamasta (Sanskrit: छिन्नमस्ता, Chinnamasta, “She whose head is severed”), often spelled Chinnamasta, and also called Chhinnamastika and Prachanda Chandika, is a Hindu goddess. She is one of the Mahavidyas, ten goddesses from the esoteric tradition of Tantra, and a ferocious aspect of Devi, the Hindu Mother goddess. The nude self-decapitated goddess, usually standing or seated on a divine copulating couple, holds her own severed head in one hand, a scimitar in another. Three jets of blood spurt out of her bleeding neck and are drunk by her severed head and two attendants.

Chhinnamasta is a goddess of contradictions. She symbolises both aspects of Devi: a life-giver and a life-taker. She is considered both a symbol of sexual self-control and an embodiment of sexual energy, depending upon interpretation. She represents death, temporality, and destruction as well as life, immortality, and recreation. The goddess conveys spiritual self-realization and the awakening of the kundalini – spiritual energy. The legends of Chhinnamasta emphasise her self-sacrifice – sometimes coupled with a maternal element – sexual dominance, and self-destructive fury.

Chhinnamasta is worshipped in the Kalikula sect of Shaktism, the Goddess-centric tradition of Hinduism. Though Chhinnamasta enjoys patronage as one of the Mahavidyas, temples devoted to her (found mostly in Nepal and eastern India) and her public worship are rare. However, she is a significant Tantric deity, well known and worshipped among esoteric Tantric practitioners. Chhinnamasta is closely related to Chinnamunda – the severed-headed form of the Tibetan Buddhist goddess Vajrayogini.