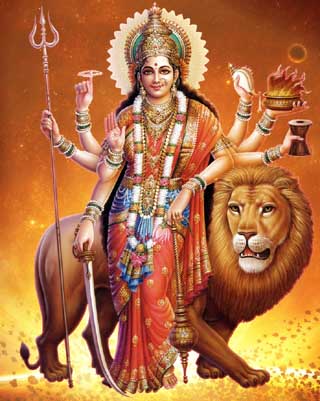 Durga, also known as “Devi Shakti” and by numerous other names, she is most worshiped devi of Hindus. She is the warrior goddess, whose mythology centers around combating evils and demonic forces that threaten peace, prosperity and dharma of the good. She is the fierce form of the protective mother goddess, willing to unleash her anger against wrong, violence for liberation and destruction to empower creation.

The word Durga (दुर्गा) literally means “impassable”, “inaccessible”, “invincible, unassailable”. It is related to the word Durg (दुर्ग) which means “fortress, something difficult to access, attain or pass”. The word Durga, and related terms appear in the Vedic literature, such as in the Rigveda hymns 4.28, 5.34, 8.27, 8.47, 8.93 and 10.127, and in sections 10.1 and 12.4 of the Atharvaveda. A deity named Durgi appears in section 10.1.7 of the Taittiriya Aranyaka.While the Vedic literature uses the word Durga, the description therein lacks the legendary details about her that is found in later Hindu literature.

Durga is worshipped in Hindu temples across India and Nepal by Shakta Hindus. Her temples, worship and festivals are particularly popular in eastern and northeastern parts of Indian subcontinent during Durga puja, Dashain and Navaratri.

Here you can find many mantra of Goddess Maa Durga  particularly overcoming to many types of problems and getting better life of using them .

Meaning : O Devi, the omniscient, the consort of Vishnu, We bow to your majesty again and again. Please bless us.

Mantra To Fulfill All Suitable Desires:

This Mantra helps one in attaining all types of Siddhis.It is considered most effective and secret Mantra and has power to fulfill all suitable desires .

Power of this mantra: By reciting this Mantra one gets intelligence, beauty and prosperity. It helps in the realization of self.