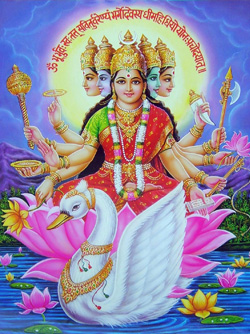 Maa Gayatri is typically portrayed as seated on a red lotus, signifying wealth. She appears in either of these forms:

1). Having five heads (Mukta, Vidruma, Hema, Neela, Dhavala) with the ten eyes looking in eight directions plus the earth and sky, and ten arms holding all the weapons of Lord Shiva, Lord Vishnu and Lord Brahma.

2). Accompanied by a white swan, holding a book to portray knowledge in one hand and a cure in the other, as the Goddess of education.

She is an aspect of Mata Saraswati, Mata Lakshmi and Mata Parvati, all three in one form, a form of Adi Shakti, as she is the human form of the Gayatri writings of the Vedas, hence called Gayatri meaning ‘Gaya’ to sing and ‘tri’ referring to the three Goddess, is the source of Brahma’s power. Without her, Brahma remains dormant or unable to create. It’s said that if one were to worship anyone, Gayatri, Lakshmi, Saraswati, Durga or Radha devi, it is equal to worshiping all the pancha (5) matha.

Gayatri mantra is meant for realization of God and is regarded as representing the Supreme Lord. It is meant for spiritually advanced people. Success in chanting it enables one to enter the transcendental position of the Lord.

During the worship Maa Gaytri, Chant this Mantra with offering cloth or chunni to her :