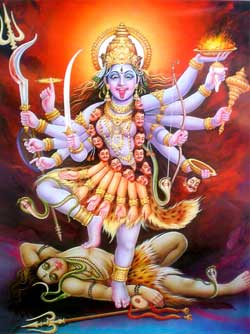 Maa Kali , also known as “Kalika” (कालिका), is a Hindu goddess. Kali Word derived from the Sanskrit root word Kaal which means time. Maa Kali is the most misunderstood of the Hindu goddesses. People relate her with death, sexuality, violence, and, paradoxically in some of her later historical appearances.

It is partly correct to say Maa Kali is a goddess of death but She brings the death of the ego as the illusory self-centered view of reality. Nowhere in the Hindu stories is She seen killing anything but demons nor is She associated specifically with the process of human dying like the Hindu god Yama (who really is the god of death). It is true that both Maa Kali and Lord Shiva are said to inhabit cremation grounds and devotees often go to these places to meditate.

Maa Kali is kaal shakti or the power of time. She indicates the impermanence of all things, which is why she wears a garland of skulls. Yet she is also the ultimate transforming power of time, which is to take us from death to immortality. Along with endless time, Kali is boundless space, the limitless void, indicated by her dark blue colour. Her magical dance of transformation is all existence.

Maa Kali holds the vidyut Shakti, the lightning or electrical force of consciousness that is the supreme power. All the goddesses and the entire universe manifests from her indomitable force. Kali’s seed mantra is “kreem,” which is the kriya shakti or power of transformation behind the vast movement of life.