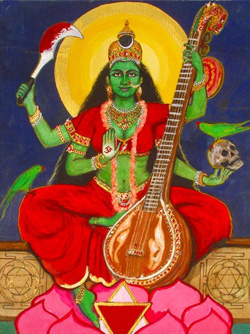 Matangi is one of the Mahavidyas, ten Tantric goddesses and a ferocious aspect of Devi, the Hindu Divine Mother. She is considered to be the Tantric form of Sarasvati, the goddess of music and learning. Like Sarasvati, Matangi governs speech, music, knowledge and the arts. Her worship is prescribed to acquire supernatural powers, especially gaining control over enemies, attracting people to oneself, acquiring mastery over the arts and gaining supreme knowledge.

Matangi is often associated with pollution, inauspiciousness and the periphery of Hindu society, which is embodied in her most popular form, known as Ucchishta-Chandalini or Ucchishta-Matangini. She is described as an outcaste (Chandalini) and offered left-over or partially eaten food (Ucchishta) with unwashed hands or food after eating, both of which are considered to be impure in classical Hinduism.

Matangi is often represented as emerald green in colour. While Ucchishta-Matangini carries a noose, sword, goad, and club, her other well-known form, Raja-Matangi, plays the veena and is often pictured with a parrot.