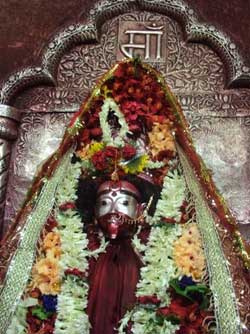 In Hinduism, the goddess Tara; meaning “One who protects”, is the second of the Dasa (ten) Mahavidyas or “Great Wisdom goddesses”, and is a form of Shakti. Tantric manifestations of Durga or Mahadevi, or Parvati. The word ‘Tara’, and also ‘Tarini’ (another popular name of the goddess) have been derived from the Sanskrit root syllable ‘tAr’, signifying protection. In many other contemporary Indian languages, the word ‘tara’ also means star. As the star is seen as a beautiful but perpetually self-combusting thing, so Tara is perceived at core as the absolute, unquenchable hunger that propels all life.

In the group of the Mahavidyas, Maa Tara comes next to Kali. Maa Tara closely resembles Kali in appearance. And just as Maa Kaali, Tara too displays gentle yet fierce aspects. Maa Tara is said to be more approachable to the devotees because of her maternal instincts. Tara meaning star, is seen as a beautiful but perpetually self-combusting goddess.

Following is the most effective mantra one chants to please Maa Taara: