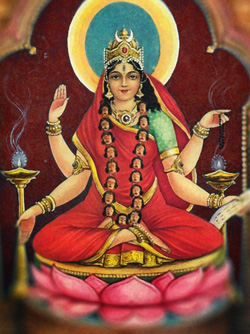 Bhairavi is a fierce and terrifying Hindu goddess associated with the Mahavidya’s. She is the consort of Kala Bhairava.

The name Bhairavi means “Terror” or “awe-inspiring” or “the fierce goddess”. She is the sixth of ten Mahavidyas. She is also called Tripura Bhairavi. “Tri” means three, “Pura” means fortress, castle, city, town, etc. Tripura Bhairavi convey three different stages of consciousness i.e active, dream and deep sleep. She is in the form of all triads and once these triads are transcended, the Brahman is attained. In other words, once we have her grace, we can realize Shiva consciousness. Hence She is called Tripurabhairavi.

She is described with various forms. In the most popular form she is seated on a lotus with four hands, one with a book, one with rosary beads, one with chin mudra and another with varada mundra. In another form she is carrying a sword and a cup containing blood and other two hands showing abhaya and varada mudras. She is also depicted as sitting on Shiva, which is more predominant in tantric worship. She is also depicted as a queen, closely resembling Rajarajesvari.

Bhairavi is also a title for a female adept in Kundalini Tantra. A yogini is a student of Tantra or an aspirant. A Bhairavi is one who has succeeded. So the one who has achieved the state of Bhairavi, is beyond the fear of death and therefore awesome.