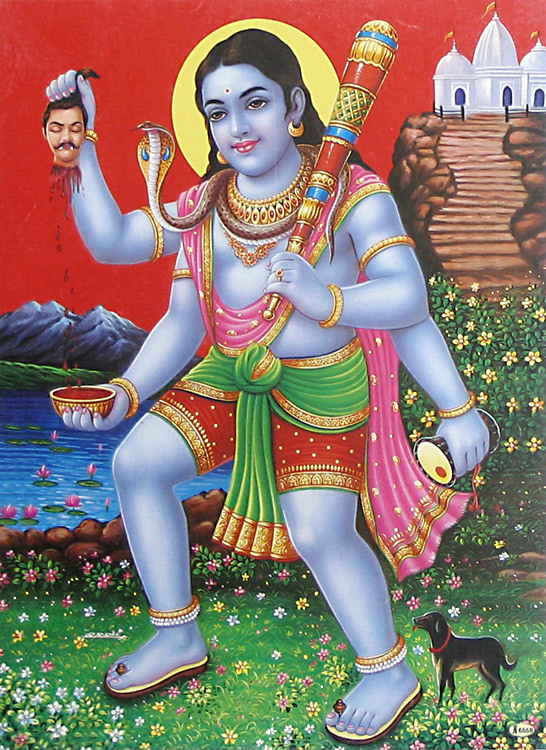 Lord Bhairav is an fierce incarnation of Lord Shiva.The Bal Rup(cradle)of Lord Kala Bhairava is known as Batuk Bhairav. Vigyan Bhairav or Bhairav Tantra text defines Bhairav as Bhaya sarvan ravayati sarvado -vyapako khileIti bhairavo shbdasya santatocharacchivah. The origin of Bhairava can be traced to the conversation between Lord Brahma and Lord Vishnu recounted in “Shiv Maha-Puran” where Lord Vishnu asks Lord Brahma who is the supreme creator of the Universe. Arrogantly, Brahma tells Vishnu to worship him because he (Brahma) is the supreme creator. This angered Shiva who then incarnated in the form of Bhairava to punish Brahma.

Bhairava beheaded one of Brahma’s five heads and since then Brahma has only four heads. When depicted as Kala Bhairava, Bhairava is shown carrying the decapitated head of Brahma. Cutting off Brahma’s fifth head made him guilty of the crime of killing, and as a result, he was forced to carry around the head for years and roam as Bhikshatana, a mendicant, until he had been absolved of the sin.

In the form of the frightful Bhairava, Shiva is said to be guarding each of these Shaktipeeths. Each Shaktipeeth temple is accompanied by a temple dedicated to Bhairava.