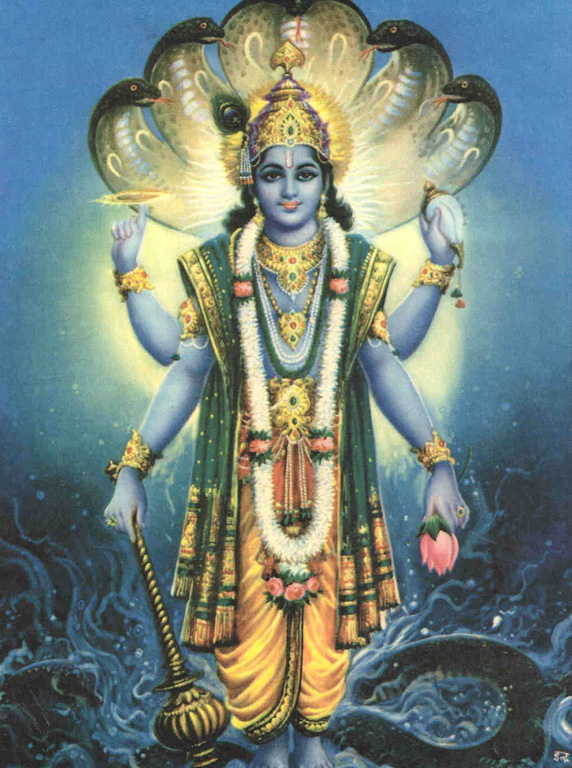 Vishnu is one of the principal deities of Hinduism, and the Supreme Being in its Vaishnavism tradition. Along with Brahma and Shiva, Vishnu forms a Hindu trinity (Trimurti).

In Vaishnavism, Vishnu is identical to the formless metaphysical concept called Brahman, the supreme, the Svayam Bhagavan, who takes various avatars as “the preserver, protector” whenever the world is threatened with evil, chaos, and destructive forces. His avatars (incarnations) most notably include Krishna in the Mahabharata and Rama in the Ramayana. He is also known as Narayana, Jagannath, Vasudeva, Vithoba, and Hari. He is one of the five equivalent deities worshipped in Panchayatana puja of the Smarta Tradition of Hinduism.

In Hindu inconography, Vishnu is usually depicted as having a dark, or pale blue complexion and having four arms. He holds a padma (lotus flower) in his lower left hand, Kaumodaki gada (mace) in his lower right hand, Panchajanya shankha (conch) in his upper left hand and the Sudarshana Chakra (discus) in his upper right hand. A traditional depiction is Lord Vishnu reclining on the coils of Ananta, accompanied by his consort devi Lakshmi, as he  “dreams the universe into reality”.