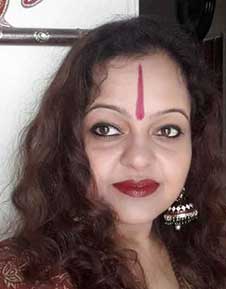 Destiny is the truth and final result of our life. This truth and result cannot be changed and it is necessary to happen. Destiny is linked to each and every sphere of our life i.e. birth, marriages (arranged or inter-caste marriages), career, job, money and property. It is proved to be amazing that this destiny can be predicted by astrologers. An astrologer can predict the time of marriage, birth and path of career. He or she can give the problem solutions with respect to inter-caste marriages and arranged marriages. He or she also provides the process of tantra, mantra and puja along with career problem solutions.

One of the astrologer that deals with happenings of birth and marriage along with the process of tantra, mantra, puja, typical problem solutions and career problem solutions, is Himani “Agyani”. She belongs to traditional Hindu family. She has got the treasure of secret rituals by her parents, grandfather and other family members.  As due to expertise knowledge of mathematics, her father promises exact calculations in the field of astrology. Her mother possesses the quality of intuition and sixth sense combined with the heavenly energy of god. If the nature is concerned, then she is very simple.

The initiation of her grandfather and uncles took place in Shankaracharya and nath yogi’s traditions. The name of her maternal grandfather was Sri Ram Chandra Ji. Her maternal uncle is famous for doing the practice of ‘Chakra Awakening’ yoga system. She has got the boon of the important secrets of the highly esteemed spiritual path.

The time when she had done doctorate in naturopathy yoga and meditation was the year 2002. Since the year 2002, she has been engaged in teaching of tarot cards reading to different people of the world. She makes future predictions with full accuracy. Her knowledge of trantic and mantra is at par. She is the disciple of Shri Durga Nath Ji (Great Nath Yogi). She is considered to be the most favourite student of guru ji. Guruji taught her so many secrets of Tantra Shastra in 2007 and this tantra shastra provide help to every human being for his or her problems. He had given his sidhi and powers to her before the time he went to Samadhi. Now, as a representative of guruji she is working for humanitarian. She is such a blessed and powerful soul who can transform our life from ground zero to top. She provides the tantra and mantra to solve a typical problem of our life. By her astrological knowledge and tantric procedures she removes the ill-effects of sorrows and pains of the individual. Even she provides solutions to remove obstructions in the career development of the individuals. She also provides the mantras to get rid of any disease or sickness.

Experience With Respect To Media and Corporate

Newspapers, Reputed Indian TV channels and FM Radio have gained their recognition by means of Himani’s Tarot Predicting Services. In the year 2005-2008, Rajasthan Patrika had got the written work of “Weekly Zodaic Prediction Column” and in the year 2008 to 2010 Dainik Bhaskar had got the same. Since 2005 to present, she has become a part of TV Channel Zee Rajasthan and the day of her Live Show is Monday. Since the year 2007 up-till now she has become a part of the FM Radio City 91.1 for “Daily Morning Show on Daily Zodiac Prediction. Since the year 2016 up-to now she has become part of the Patrika TV channel and Daily Zodiac Prediction is distinguished by her Astrology and Tarot Cards Reading Services.

One of her biggest achievement is that she had got the opportunity to teach Graphology to Defence Officers of Indian Military (2016). In January 2017, she had got Parashar Rishi Award. In January 2016, she had got Bhart Shiksha Ratna Award. In the year 2016, Himani “agyani” has been awarded by so many institutes for tarot cards reading and researches with respect to the field of future prediction calculation.  Some of these institutes are as follows:

In the year 2015, Shree Jagdish H Makwana, Council General, Luzern, Switzerland was awarded as “Award of Honor for Research in Tarot”.

In the year 2014, she was awarded as “Devagya Shiroamani” by Kaljayi International Para Evm Jyotisha Vastu Shodh Sansthan.

In the year 2013, she was awarded as Jyotisha Shree by All India Federation of Astrologers Society, New Delhi.

In the year 2012, she was awarded as Jyotisha Mahrishi by Akhil Bhartia Jyotisha Sanstha Sang, New Delhi.

In the year 2011, she was awarded as Jyotisha Shiromani and Jyotisha Marmagy by Future Point, New Delhi and Future Samachar, New Delhi.

In the year 2008, she was awarded as Shastri and Jyotisha Manishi by Akhil Bhartiya Ved Vigyan Parishad, Merrut (UP) and Akhil Bhartiya Jyotisha Sanstha Sangh, New Delhi.

In the year 2007, she was awarded as Jyotisha Maharishi by All India Federation Society of Astrologers, New Delhi.